Gratitude month #1
It's November. And, it's when I do my daily gratitude posts.
I know it's probably cheesy, and it may be something you just want to scroll on past. But for me, it gives me cause to stop and reflect on what I do have to be thankful for.
And, as in the past I begin the month with gratitude for my mom; Ida Stevens Clemens.
Mom was born 106 years ago today in the back hills of eastern Kentucky. She was the oldest in a large family, and was the only girl. There was a baby sister who died at age three from being "liver growed" (ask me), but Mom held her own with all of her brothers.
She survived the 1918 flu epidemic that took several of her brothers and many of her cousins. Both she and her mom were stricken, but made it through. She recalled leaning up on one elbow to look out the window, only to see row after row of coffins with no one well enough to bury them. She kept a snippet of a journal recalling that terrible time, which I transcribed and sent in to either the History Channel or PBS. (I forget.)
She married my Dad in 1932, who was the middle child in a large family. I asked her what it was like getting married and living in the Great Depression. She said they didn't even know one was going on. They were poor.
Mom, Dad, and my three sisters were living in West Virginia when two missionaries from The Church of Jesus Christ of Latter-day Saints knocked on their door. Mom listened to what they had to say, and knew they were offering her much more than what had been in her life. Being a strong woman in 1948, and against the wishes of her husband, Mom and my three sisters were baptized.
I am amazed. She was a "don't mess with me" type of person, and when I came along several years later, I grew up with that same attitude. Weakness was not in her nature, nor my sisters', and certainly not in me.
Mom passed away in 1984, just a few months after her last grandchild was born. Sometimes I am jealous of my sisters, who had her more years than I did. When she died, I was only 29.
I miss her so much, for not a day goes by that I can't think of what she would have done, or what she would have said, or would she just have said nothing at all, and give you "the look".
We all know "the look". If I was naughty at church and happened to see her at the end of the hall, I knew that shortly she would be marching down that hall, her arms pumping and smoke coming from her nostrils. Don't even bother trying to outrun her. She had nine brothers.
I had the Mom that was meant for me to have. And for that, I am grateful.
And, I can hardly wait to see her again...
PS...I constantly get comments about how much I look and act like her. And best of all, think like her. The double photo below is her on the left, and me on the right holding one of our preemie grandsons. When I first saw the one of me, I was trying to recall where Mom was when it was taken. It wasn't her. It was me! 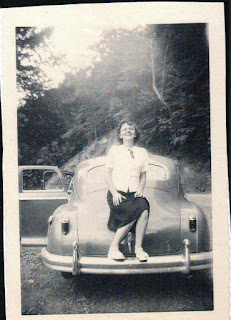