The Music That Soothed Her

Music has always been a big part of my life.  I have written about my love for the piano, and my parents' sacrifice to buy one for me.  The blog post may be found here:  http://alwaysanxiouslyengaged.blogspot.com/search/label/Music

I don't believe my mother's side of the family had much talent for music.  Mom had no rhythm or timing when it came to singing, and not very good pitch, either.  But, that certainly didn't keep her from singing her heart out.  I didn't notice anyone else in her family being blessed with musical abilities, either.

Dad was a different matter.  His dream was to always conduct an orchestra.  An elaborate stereo sound system always graced our home, where dad would be playing his "long-hair" music.

I can remember some girls knocking on our door one evening.  They went to my school, but I didn't know them very well.  When I opened the door, they heard my dad's music and screeched, stating that I was one of the luckiest people they could imagine.

I believe that my dad could have been fine musician, if the opportunity and the resources had been there for him.  But, they weren't.

I recently transcribed my dad's journal, and placed the contents on FamilySearch.  I was reminded of something that he often talked about, and I blogged about on 12 Mar 2013.

"Dad always talked about his little sister, Betty, who died when she was 3 1/2 years old.

Betty was born when Dad was two years old.  She was the sixth child out of eleven that would come to that family.

One day, older sister Mary was rocking little Betty by a pot bellied stove that had a pot of beans cooking and bubbling away on the top of it.  As she rocked Betty, she would "push off" with her foot against the stove.  Each time she pushed, the pot of beans would move a little closer to the edge.

It eventually moved too close to the edge and fell right on to baby Betty and Mary.  It mostly covered Betty, scalding her severely.

It took Betty three, agonizing days to die from the burns.  What a terrible death!  And, the terrible feelings that Mary must have had running through her 11 year old mind.  The helplessness of her parents hearing her cries must have haunted them throughout their lives.

One of my sisters is named Betty in honor of this sweet little aunt that died so many years ago."

But, I didn't finish that story.

"...and of course the doctors was not trained to treat severe burns in those days and the most the doctor could do for her was to give her Morphine to ease the pain till she died, We lived on Clark hill at that time, a part of Olive Hill.

It took little Betty three whole days to die.  Three whole days.  There was nothing they could do but give her morphine to ease the pain.

I, too have lost a child.  He was much older, but still my child.  There wasn't much to comfort me.

But, as I read Dad's journal, I began to think about the words that my grandmother sang to her little girl, probably hoping that the sound of her voice and the words to the song would comfort them both.

And, I was even able to find a recording of a mountain woman singing this song -- probably sounding much like my own grandmother would have sounded.  It's only a couple of minutes long, but if you feel so inclined, please listen to a piece of Appalachian history -- one that my grandmother may have sung to comfort her grieving heart.
http://digital.berea.edu/cdm/ref/collection/p16020coll13/id/500
Posted by MissPeggy55 at 8:49 PM No comments: Links to this post

Adding Them Up and Keeping Them Straight

I love my military ancestors.
As I look into their faces, I often wonder the thoughts that may have been going through their mind as they left their homes and families; perhaps never to see them again.  The photo above is of Robert H. STEVENS, a veteran of the Civil War, and one who served as a POW.  He also suffered a pain in the side and a broken foot, perhaps from a sudden jar from shells from a cannon.  (information taken from the 1890 Kentucky Union Veteran's Census)

After picking up where my parents left off, I began to discover more and more military ancestors; so many that I began to lose count.  I really wanted to keep a running list of them, and prepared an Excel spreadsheet to do so.

First, I asked Mr. Kerry to give me a list of all of the wars the United States has been involved in, including the years.  In just a couple of moments, he handed me a list.  (Note:  We have been married nearly 39 years.  The trash has been picked up every week during the wee hours of Friday morning -- for 39 years.  Every Thursday, I gently nudge him and ask, "Kerry, do you remember whose coming tomorrow?"  His answer, after pausing to think, "Uh, your sisters?"  Sigh...But, he can remember every war America has been part of.)

I entered those wars and their years across the top of a spreadsheet, leaving a column on the left to enter their names.

Each time I find a new military ancestor, it is easy to insert his/her name on the left, and to write a very brief description in the war column.

I now have added ancestor #169!!  I could never remember all of them without a chart to help me out.

I have also included those who are currently enrolled in the military.

It's just one more way to keep me straight.  Perhaps it can help you, too!
Posted by MissPeggy55 at 7:07 AM 8 comments: Links to this post

Documenting Your Experience - It's Worth the Effort!

I need help keeping up with my own self.


When a "Call for Papers" is issued by a society, there is usually a section that asks for prior speaking experience.  In past years, I didn't really keep a record like I should have, and it was a difficult task to reconstruct all of those events.

So, I began a file in Dropbox to help me in that effort.  I call it my "Genealogy - Learning and Teaching List".  It looks like this:

Each time I attend a class or present a class via conference or webinar, it is recorded.  I looked back over my calendar, and using syllabi from conferences and webinars from various organizations, I put it together.  Let me show you what 2015 looks like:

Again, there are two divisions for each year -- one for learning and one for teaching.

Here is part of the file for learning: 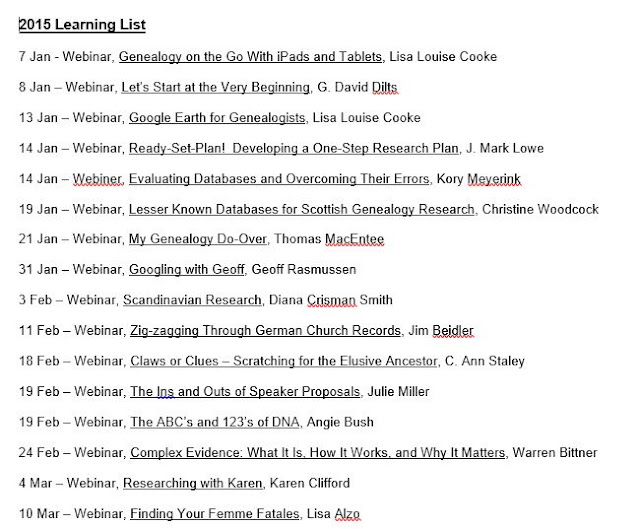 The list goes on for several more pages.  It also includes conferences where I have attended classes.  As much as I love hanging out with genea-friends during these events, I am also there to learn!

The one I am showing below was the clincher for me: 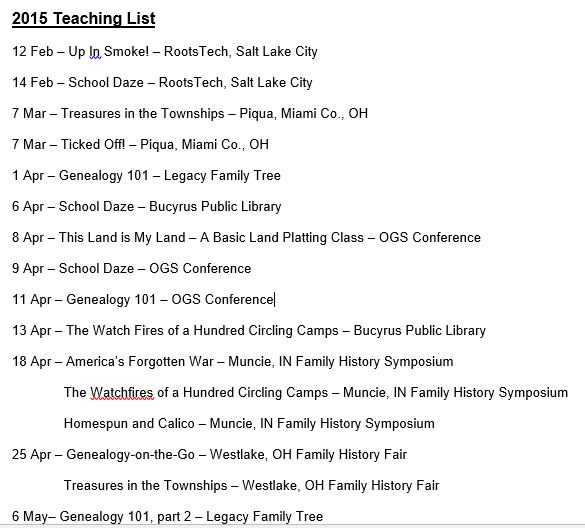 Last November, I was reviewing my lists for 2015.  As I was adding up the various venues I had been part of, either in person or via webinar, I realized why I was feeling a bit worn out.

The in-person events added up to 62.
The webinars accounted for about 15-20 more.

I made the decision to fulfill my commitments up to the end of June for this current year, and to spend the last half of the year working on my own.  That includes research on my own family, refreshing some of my lectures, and the development of new ones.

And, it has been wonderful!

I have made a trip to Kentucky, with another one planned in September.

I have refreshed about 1/3 of my current lectures.  The others are still in the works.

I am in the middle of developing four new ones, with a few more rolling around in the back of my head.

There have been some "Calls for Papers" that I have responded to, and when I do I include the cumulative experience that I garnered from compiling my lists. 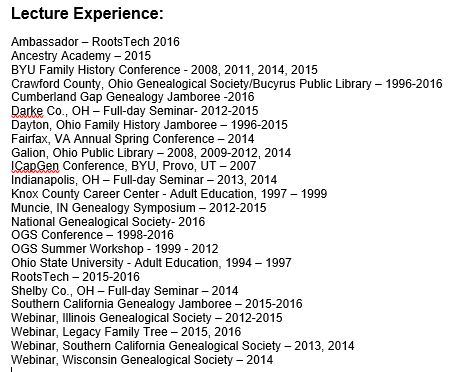 Now, there is another reason I am keeping this type of a record.  As with any credentialing organization, I am required to renew my Accreditation through ICAPGen every five years.  Though I am not inclined to do client work anymore, I feel I must show that I am keeping myself current and fresh.

These lists do the job for me.

And, there's even one more reason.

I have talked with several genealogists through the years that would love to become part of the speaking circuit.  A few still have children at home, or for one reason or another are just not able to do it right now.

My advice:  Do the above!

Start where you're at, and begin to record and document every time you are asked to present a class anywhere.  It doesn't matter if it's:


I think you get the idea.

All of these experiences count!  Most recently, a friend of mine was able to receive credit for two college classes because her cumulative list showed the advisor the needed field experience for teaching.

Be sure to ask for a letter of recommendation from any organizer that you work with.  These can carry a lot of weight, especially if they keep asking you to return.

Your time and your effort count.  But, until you actually see it written down, you may not realize just how much you have done.


Posted by MissPeggy55 at 1:28 PM No comments: Links to this post