Today concludes my Christmas posts for 2020. I hope there has been some joy in both the music and the treasures I have posted.

Today's posts is a culmination of all of the previous posts. All have pointed to Christ in one way or another. They are filled with the appreciation I have for all he has given to me - to us.

Even the tiniest of things have meaning. The Danish plates point to Kerry's heritage. The ornament from Valley Forge represents my own ancestors, as well as some of Kerry's who fought to preserve our God-given freedoms on this land.

The Russian nativities and nesting dolls point to all of God's children around the world that he loves.

The Christmas plates from Kerry's mother point to the giving of something we would cherish for the rest of our lives. The kerosene lamps reminding me of Christmas Eves with my parents point to the light that Christ brings into our lives.

The red gingham bows my mom and I made together represent the time spent within a family, and how we should make an effort to get things all tied up in our lives.

The baby booties and quilt made and give to baby son Peter represent that Peter once lived, he died, and is very much alive in spirit in the afterlife. Trust me when I say I know this.

The cowboy boot from OGS represents that every now and then we need a kick in the rear to get us going in the right direction. Again, trust me when I say I know this.

So today, Kerry and I are grateful for the birth of Jesus Christ whose birth we celebrate today. A deeper study will show that it likely didn't happen in December, but that it happened at a different time of year. But, that's a whole other discourse. Today we commemorate that he was born and lived and taught his doctrine, he died to redeem us from our sins through his atoning sacrifice, he was resurrected.

And, he will return.

We were taught those things as children, growing up 3,000 miles apart.

We believe those things as adults, because we choose to.

Merry Christmas to all of you. May you find the peace that we have.

Peace is not living without conflict. It is finding peace amidst the conflict. 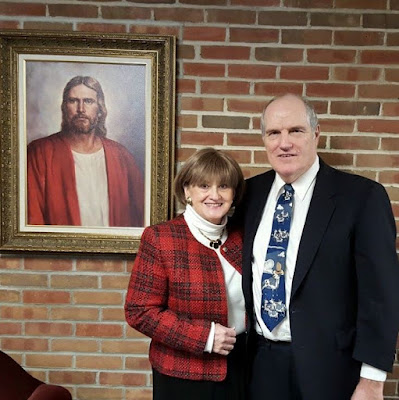 This virtual Hallelujah Chorus came out in 2016 before there was ever a pandemic, or virtual choirs and orchestras.

It was spot on!

So today as we celebrate and commemorate the birth of Jesus Christ, we have every reason to sing Hallelujah that such a tiny one came into to the world to redeem us from our sins.

This will conclude my Christmas music posts for 2020. Merry Christmas!

During the years 1971-1973, young Kerry was serving a mission in the Delaware/Maryland Mission. He had left for the mission field in September of 1971, arriving in Maryland sometime in October.

It was his first real time away from home. His parents taught him well, and he loved his mission and the area he was in - enough to return to it at the end of his mission.

But at Christmastime, your heart turns homeward.

During his first Christmas away from home, he and his missionary companion were poor, not having much more than about $150 each month as a living allowance.

They at least wanted to have a tree, so pooling their money they bought one for $4.

And, most missionaries don't take Christmas decorations with them in their suitcases from home. So, Kerry found some cardboard and cut out a star to place on top of their $4 tree.

We still have that star 49 years later.

After we married in December 1977, we decorated our first tree together. Soon, Kerry placed this cardboard star on the top of our absolutely perfect tree. I gasped. What in the world was that thing?

I put up with that star for years, always wanting a beautiful angel with a long flowing dress. One year I finally bought one and told him that it was going on the tree.

He quietly took his star down, placed it safely in a folder, and didn't say much.

I felt like a heel. I looked at our tree, and thought it was the ugliest one I had ever seen. I told him how I felt, and asked him to bring his star back out.

Peggy learned a valuable lesson that didn't use any words. Just feelings. I learned how to get rid of my selfish self.

We now have framed the star so the points don't get damaged, and it hangs year round in our dining room.

And, it is the most beautiful thing in that room. 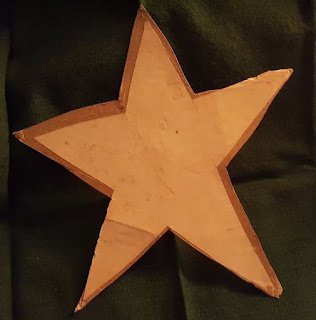 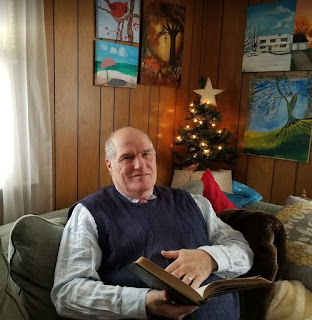 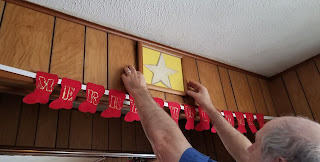 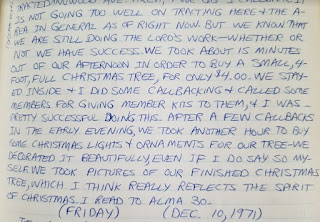 Years ago a man from another faith told me of one of the yearly memories from his childhood.

They lived in the Ohio countryside surrounded by lots of hills. His parents always played records from the Mormon Tabernacle Choir during the holiday season, but particularly on Christmas Eve. As a young boy he could remember looking out his upstairs bedroom at snow covered hills and hearing the Tabernacle Choir playing on the record player.

It is a tradition he has kept for nearly 70 years.

And, this is the song that clinched the feeling of Christmas for him then...and, still does,

A few years ago I made a decision about Christmas. My own children were adult enough to realize the meaning behind celebrating the birth of Christ during this time of year.

So, I decide that every Christmas card I sent, and nearly every decoration would be centered around this meaning. I still have some of the favorites from years' past.

But, I began to change on the inside.

And it's all for the better.

This year the Relief Society Presidency gave out gift bags that contained a number of beautiful items inside. One of them was this ornament that I absolutely love. And, everyone who received one loves theirs, too! 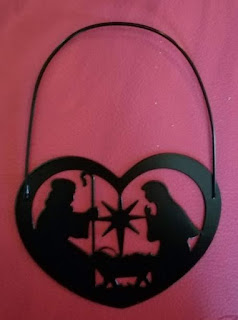 A few years ago, in a very short amount of time, a thousand people came together to create this beautiful nativity.

And it leaves me breathless each time I hear it.

This is absolutely one of my most favorite Christmas carols coupled with one of the most tender videos ever. Whenever I hear any other arrangement, I can't help but compare it back to this arrangement.