Today I am grateful for parents that taught me preparedness.
My parents instilled something in me from the time I was just a little girl, just as it had been instilled in them by their parents. The lesson was to be prepared.
They taught me skills that could be beneficial to me in case of a crisis. And, a crisis could be anything -- from a power outage, to an attack, to a truck strike, to unemployment, to just about anything.
Let me tell you some things they taught me:
1. Both of them taught me how to cook over an open fire, both outside and in a fireplace. It takes some skill to cook in cast iron and not burn everything on the outside, leaving it raw on the inside. 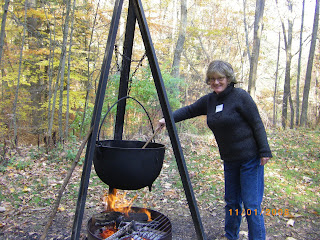 Malabar Farm hosts a Thanksgiving meal each year that the participants cook themselves over open fires.  I am stirring a kettle of potato soup with sausage and kale.
2. Mom taught me how to survive in the woods if I ever became lost. She taught me what I could eat, what to stay away from, and even how to build a shelter. 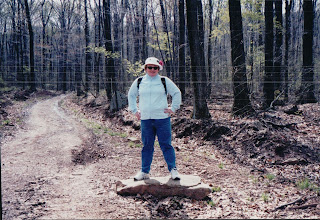 Kerry and I went hiking on Backbone Mountain in Maryland a few years ago.

Once, when we were in the holler behind her parents' house, she was showing me these things, and issued a warning; that if I were to ever begin smelling something like a cucumber or a muskmelon...be very, very still. Why? Because a copperhead may be near by.
I laughed at her.
Until a couple of years later when we were walking. I smelled a cucumber like it had just been cut. I turned around to say something to her and she motioned to be still. She pointed her head to the right, and there indeed was a copperhead, coiled. Read to strike.
Mom always had a walking stick and a few rocks in her pocket. Without moving, she reached in for a rock, flicked it, and totally decapitated that snake.
I died. I never laughed at her again.
3. Both mom and dad taught me how to shoot. They set up targets and wouldn't let me go until I had satisfied them. Later, when I got my CCW, I blew away the center of the targets. The instructor and other students said, "Dang! Who taught you how to shoot?" My Kentucky mama.
4. They always had a big garden, Jack-in-the-Beanstalk style. When everyone else's gardens would be drying up and failing, their's flourished. Mom planted leftover smelt (fish) in the corn and bean hills one year, and every doggone cat in the neighborhood was in that garden! 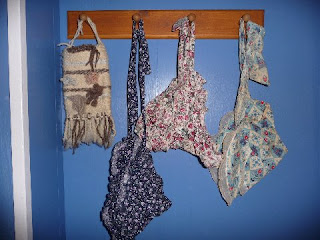 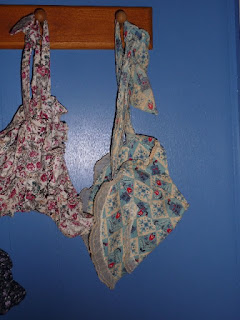 Mom always wore her bonnets in the garden or when working in her flowers.
They hang in my house today.
5. They preserved everything they grew. I spent my childhood snapping beans, peeling apples, cutting corn, making ketchup, apple butter, applesauce, etc. Someone once asked me if I was afraid to eat something canned. Are you kidding me? I knew what went in the jar!
6. To be prepared to evacuate. A 72-hour kit wasn't really called that when I was young, but we had something to keep us going in a catastrophe. Depending on the government to help us was not ever mentioned, and was absolutely not an option. Take care of your own self.
7. Cook from scratch. Look at what you have on the shelf and make something out of it. Don't go running for convenience foods that has unidentifiable stuff in it.
8. Learn how to hide. My parents stuffed me up into a fireplace when a rash of tornadoes came barreling through our part of Ohio. They pulled the dining room table up close and stayed underneath it while I was in a safer place in the sturdy fireplace well. We had no basement.
9. Keep kerosene lamps filled with oil to spare. Keep wicks. Don't use scented candles, for the odors will all mix together and give you a headache. Mom always turned all of the lights out on Christmas eve, just having the tree lights and kerosene lamps on. I still do it to this day.
10. Be prepared to help your neighbor. They might not have been taught as well as you have.
And so, I still do these things. I don't can as much as I used to, but I can recall Kerry and the kids and I looking at over 800 jars of food we had put up as a family. Everyone had their part.
I thank my parents for teaching me these "old-fashioned" ways, for they learned from their parents, who learned from their parents...
Posted by MissPeggy55 at 4:47 PM No comments: Links to this post

I mourn with France

My head and my heart are heavy this week as we reel from all of the newscasts that are flooding the media.  I mourn with the people of France.

I have never been to France.  But, my heart has.  I took four years of French in high school.  I don't know why.  Everyone else seemed to be taking Spanish, which I probably should have done.  But, I've never been one to jump on bandwagons, so I took French.

The first thing we did in French class was look up all of the bad words.  To this day, the only things I can remember in French are beef, eggs, and telling someone where to go.

But, during my senior year I was invited to go on a special trip to France.  I was one of the top students in the class, so part of the fee for traveling would be covered.  Somehow, we would have to come up with the other part.

And, we did.  Things were falling into place.  I had my passport photo taken, which was awful.  We could piece together whatever else I would need.  My parents weren't too thrilled about it, but I convinced them I would be just fine with the group that was going.  My French teacher with the tight little Cheerio curls had been there many times before. 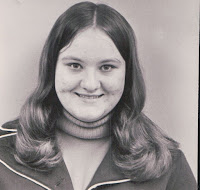 As we were narrowing down to the day, out of the blue my brother-in-law felt I shouldn't go.  What?  He just didn't feel good about it.  He talked with my parents, and they listened to him.

Perhaps it is well they did.  Lightning hit the plane on its way over there.  It didn't go down.  All of the students were safe.

I still can only remember beef, eggs, and telling someone where to go.  Oh, and cheese!  I remember cheese. 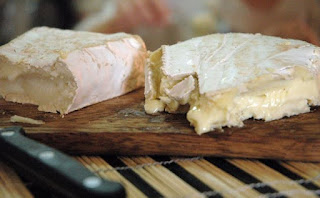 Aahh...brie, a loaf of French bread, some sparkling grape juice...

But, aside from the tragedy that has beset France, I have also been delighted to learn that I have some French ancestry -- something I didn't know during my high school years.  That would have really been the icing on the cake!

I have discovered some ancestors that were French Hugenots, as well as some that were from the Alsace-Lorraine area, long before it created in 1871.  There was always a dispute between France and Germany over this border area.  My people are from both countries.

So, though I've never been to the country that came to rescue us in the Revolutionary War, a small part of my heart -- and my heritage -- remains there.

Posted by MissPeggy55 at 9:47 PM No comments: Links to this post