Do I Have Enough Proof? Reading to the end of the line.

I have been stuck on one of my Collier lines for years.  I guess my parents were, too.

This is a photo of Anna Walker and John Beauregard Collier, my father's grandparents.  He knew them well.  John was named for his father, John B. Collier.  After that, we've always been a bit unsure. 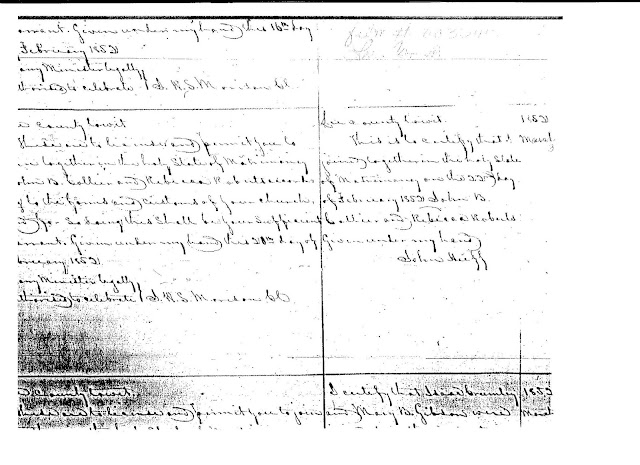 I use this particular slide in the classes I teach, for it shows that not all handwriting was atrocious.  This is actually pretty good!  Once you get into the mode of reading it, the lettering begins to flow.

The record on the left shows that John B. Collier and Rebecca Roberts asking for permission to be joined together in the holy state of matrimony.  It is dated the 20th day of February 1852 in Lee County, Virginia.

The record on the right is the minister's return, stating that he joined them together in the holy state of matrimony on 22nd day of Feb 1852.  It is dated 3 Mar 1852.

I have not ever been able to find the parents of John.  I have scoured the records and the cemeteries and the courthouses of southwest Virginia trying to find something to prove who is parents were.  I did keep running across a man by the name of Aaron J. Collier, a physician.  He is quite prominent.

I ordered microfilm records of Lee County, Virginia and searched them carefully, only to send them back to Salt Lake City.  On a whim, I reordered a birth register for the area to once again see if there was anything I had overlooked. 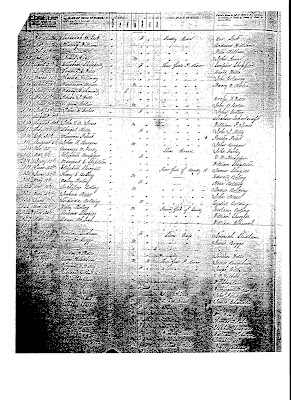 As a young genealogist, I didn't always look all the way across the page.  In the above slide, you be able to see LeGrand Collier's record of birth.  His father, John, is in the right column.  It is about one-third of the way down. 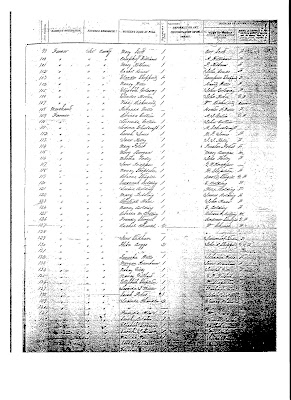 Now you can see the second page of the ledger where Rebecca Collier is listed as his mother.  This is where I always stopped.

If you continue on to the last two columns, you can see where the informant is listed as A.J. Colier.  His relationship?  "G.F."

I'm pretty sure this is the Aaron J. Collier, physician, that I have seen in so many records.  But, the relationship has me hopefully optimistic.

Could it be little LeGrand's grandfather and John's father?

I know it will take more work to prove this relationship, but it's more than I've had in the past.  And, I might have had it earlier if I had just read to the end of the line!
Posted by MissPeggy55 at 1:01 PM 2 comments: Links to this post

How Pawpaw Got His Name

Pawpaw was born in 1892 in Winkler, Elliott County, Kentucky.  We think.

Corbett Sullivan is not really a Kentucky name.  It has no hillbilly roots.  And, there is absolutely no namesake, no naming pattern, nothing that would elude as to why he was given this name.

His own father died at a very young age.  He was only 27 years old, and his mother eventually married again.

The Stevens name is quite common in eastern Kentucky.  Many of them are descended from Gilbert Stevens/Stephens, a Revolutionary War patriot who eventually moved to Morgan County, Kentucky.  It has not been difficult to follow his descendants.

My mother often said that Pawpaw didn't really know his own birthdate.  When asked to provide one for military service or Social Security, he basically made one up.  The date he made up was 6 Sep 1892.  Apparently, it was good enough.

Recently, I was talking with my uncle, the last of the long line of children from Corb and wife Bertha's family.  I asked him if he had any idea how his father had gotten his name.  Uncle Dick replied that he thought he was named after a prize fighter.

I came home and began to do a Google search on anything about the name Corbett Sullivan.  A whole new world opened up to me.

James J. Corbett was quite the prizefighter.  He was a professional boxer and World Heavyweight Champion.  His father brought the family from Ireland. 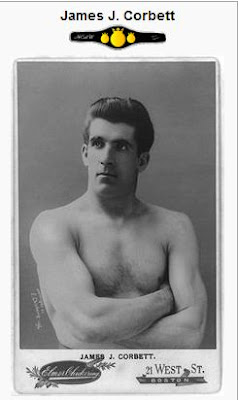 His most famous fight was against John L. Sullivan, which took place on 7 Sep 1892.  Now, scroll upwards and look at the birthdate of my grandfather again.

John Sullivan was the first American athlete to earn over a million dollars.  He was born in the South End of Boston to Irish immigrant parents, and was known as The Boston Strongboy.  In 1892, he agreed to defend his title by fighting Gentleman Jim Corbett in New Orleans.  Tickets went for the hefty price of $5-15, and the venue was filled with 10,000 spectators. 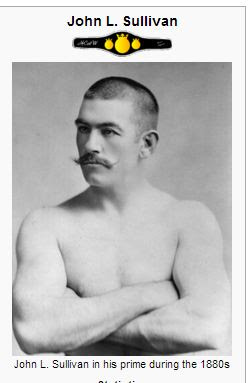 Corbett was younger and faster, and was able to dodge the blows from Sullivan.  After 21 rounds, it was over.  Corbett had won the fight against Sullivan.  Later, Sullivan remarked, "If I had to get licked, I'm glad I was licked by an American." 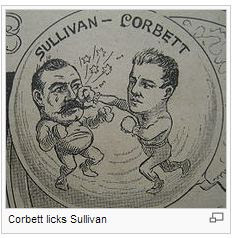 Apparently, news of this fight made it all the way to the hills and hollers of Eastern Kentucky.  And quite possibly, my mother's family knew of it.

Now, do I know for sure that my grandfather was named in honor of this famous fight?  No.  I don't know that I'll ever know that for sure.  What I do know is that for several earlier generations, there is absolutely no one named Corbett or Sullivan in the Stevens family of Eastern Kentucky.

I am grateful for www.wikipedia.com for providing the information necessary for this blogpost.  I would never have known about it otherwise.