His Navy Service Never Left Him

Dad was in the Navy.  What he learned there never left him. 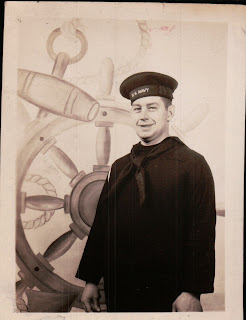 He often said you could judge a man's character by his shoes.  Some of the young men I dated did not meet dad's standards, for their shoes were unkempt.

I recently came across dad's old shoe shine box.  I had never given it much thought, for it was just something I saw him take with him whenever we traveled and wherever he moved. 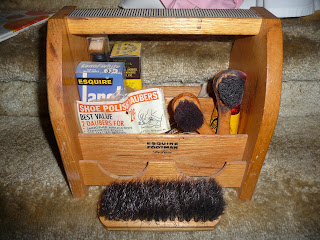 As I examined the items within it -- the brush, the Kiwi polish, the daubers, the soft buffing cloth -- I realized that the last person to touch those items were dad.  He kept his shoes highly polished, no doubt learned from his Navy years.

Dad was a young hillbilly boy from Kentucky, married with three young girls and working in the West Virginia coal mines when he received his draft notice.  He was the only one drafted from the camps.

He lived with us for a few years before he died, and each day he dressed quite smartly, made his bed so a quarter could bounce on it, and paid attention to his shoes.  Those Navy years never left him.  Never.
Posted by MissPeggy55 at 10:30 PM 1 comment: Links to this post