Against the wishes of her husband

My mother, Ida Stevens Clemens, along with my three sisters Fern, Jean and Betty, joined The Church of Jesus Christ of Latter-day Saints in 1948.

It was in a day when women didn't always go against the wishes of their husbands, especially in West Virginia.

When two missionaries from the Church knocked on her door, she listened to their brief message and invited them in.  Having not been raised in a particular religion, she was intrigued by what they had to say.  She writes in her journal:

"So now I have grown older now and have started to go too church by my self and  with neighbors to the church nowon as the Jesus only church.  And there where I met my husband to be I was 16 year old when I met him we all went to church at the same place he was baptized at one time in the Jesus only church before we were married."

Over a period of time, they returned and taught a series of "discussions", which eventually led to her commitment to be baptized with her girls.  She gave up smoking her Camel unfiltered cigarettes.  It was during this time that she and my sisters had many dreams that brought comfort to them as they made this decision.  They recorded those dreams, and I have transcribed them.  But, they are much too personal to let others read them.

They were baptized in the Guyandotte River in Logan, West Virginia.  Sister Betty nearly floated away, but they grabbed her by the hair of her head.

Dad was not pleased.

The missionaries had become a bit pushy with him, and he wasn't real sure he liked it.  So, like many others in this area of the country, they began to look northward.  Dad had three stipulations for any area he would bring his family to:
1.  A better job for him.
2.  Better education for his three girls.
3.  No Mormon church in the area!

On New Year's Day, 1950, they made it as far as Portsmouth, Ohio in a raging blizzard.  Dad had an aunt living there, and they waited out the blizzard.

Mansfield, Ohio would become their home.  All three of dad's conditions were met.

But, just four months later, Mormon missionaries were assigned to the Mansfield area.  They tracted out my mom and sisters, and a small branch was formed.

Dad was befriended by others in this small LDS community.  He was a heavy smoker.  But, slowly he was beginning to realize that he needed this religion in his life.  One day, while helping to put a roof on a church member's home and smoking away, a man teasingly asked him, "Clem, when are you going to give up those cigarettes?"

He looked at him and said, "The one you see me smoking here is the last one you'll ever see me smoke."  He threw the butt over the edge and never smoked again.

Dad worked second shift, and Mom would have a pot of coffee waiting on him when he got home at about 11:30 pm.  He would drink the whole thing.  Mom told him that it was going to kill him, for she could feel the pounding of his heart through the mattress.

Mom's decision to go against the wishes of her husband was not a popular one.  When dad joined, it was even less popular, for many in his family disowned him.  But, her initial decision affected thousands, for thus began her quest for her family's history.  Dad would soon join her in that quest.

And, their love of genealogy passed right on down to me.
Posted by MissPeggy55 at 10:08 PM 2 comments: Links to this post

What a strikingly beautiful couple! 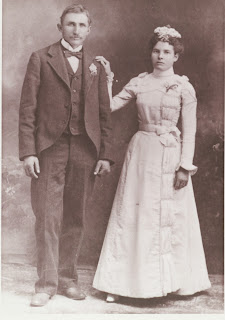 Peter Lauritzen and Mary Loanna Terry on their wedding day.
22 May 1901
Married in the Manti Temple, Sanpete County, Utah

This young bride and groom would eventually welcome twelve children into their family, with my father-in-law, Orson William Lauritzen being the tenth child. 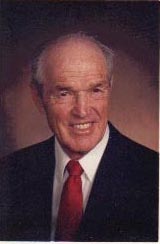 At some point, it becomes just the two of us again. 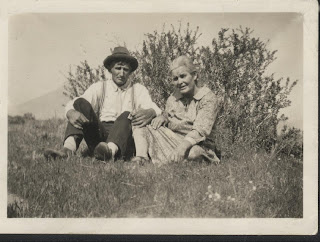 And one day, we become single again. 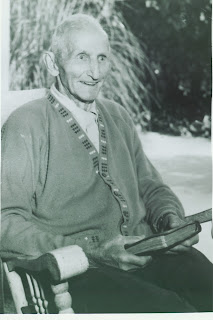 Peter Lauritzen, approximately a year before he died in 1962.
Posted by MissPeggy55 at 11:15 AM No comments: Links to this post

There is no credential war

First let me say that I appreciate the comments that have been made, both publicly and privately, concerning my post of late last evening.  It has been lively and enlightening, to say the least.

But, I do want to make one thing abundantly clear, that there was absolutely no intention of pitting the two credentialing programs against each other.  None whatsoever.  I don't work that way.  I am a builder and a lifter, not one who tears down.

A few have made the comment that I must not make an assumption of an entire organization based on the actions of one or a few.  Ummm...I'm a Mormon.  I have dealt with this all of my life.  How many times have the actions of a polygamous community been confused with The Church of Jesus Christ of Latter-day Saints and its teachings?  Or a political candidate representing all Mormons?  (That was certainly a hotbed!  I felt like I was constantly putting out fires during the election.)  Or the mainstream news organizations consistently tagging "Mormon" bank robber, or "Mormon" thief, or "Mormon" whatever...instead of just dropping the "Mormon" off completely.

I believe that for me and what I do, maintaining my AG and all of the requirements that go along with it are fine for me.  And, not for one moment am I basing one as being superior over the other.
Both bring us as genealogists to a higher level of polishing our skills and helping us to learn things we didn't know we didn't know.

So, to all of my genealogy friends, rest assured that there is no problem.  As a matter of fact, the individual that made the remarks still has my respect, for their skills are sorely needed in the professional genealogy world.  I will not publicly name the individual to maintain the respect that has been so earned.

Again, I don't work that way.