Once A Kid...Always A Kid

Once A Kid, Always A Kid

You just never stop being a kid when you're around your parents.

A few years before he died, my dad lived in our home.  I set up the first floor bedroom just for him.  It had his bed, a recliner, his desk, a television, his clothing, etc.  Everything he could possibly need was in that room.  His big oxygen unit was around the corner in the living room, and its long lead could stretch all the way into the kitchen and throughout the house.

Peter was on his mission, so we only had the three younger children at home.

Dad could and did prepare his own lunches, but I made sure he had a good breakfast (usually cracked wheat fixed in the crock pot and cooked overnight), and a good dinner.  It was a challenge blending a young family and an older man, but we did the best we could.  He was usually ready for bed about 8:30 pm and watched television until he fell asleep just after 9:00 pm.

One evening, all of our kids were out somewhere.  Between marching band, working, etc., they all had somewhere to go.  So, Kerry and I decided to go out for a bit and see a movie.  Everything in the house was taken care of, including dad.  He had no problem being left alone, so it was a perfect night.  We got ready to go, and I went in to tell him we'd be gone for awhile.

He asked me how long we would be gone.  I told him the movie was over just before 11:pm. so it would be after that.

He replied, "Don't you think that's a little bit too late for you two to be out?"

Again, he said, "Well, you just both be careful and don't stay out too late."

Kerry and I both smiled and talked about it on the way to the theater.

But, when we got home at 11:30 pm, there was dad sitting up in his recliner, waiting for us to come home.  He didn't say anything.  He just looked at his watch, looked at us, and made preparations for bed. 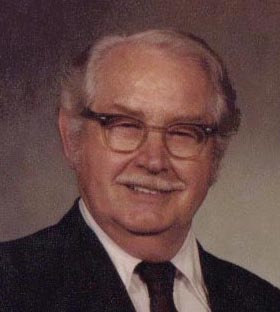 Dad looked an awful lot like Colonel Sanders, especially after he grew a white goatee a few years after this picture was taken.