Most of the time it seems like I have been posting stories and memories of my dad, Chester Clemens.  Today, it is time to reflect on my mom, Ida Stevens Clemens.

Mom was a force to be reckoned with!  I was a menopausal baby, being born when my three older sisters were ages 16, 19 and 21.  People just couldn't believe my mother was expecting a baby at her age, and some drove from Kentucky to Ohio to make sure she wasn't "funnin' with them".

Mom didn't know she was pregnant until she was nearly six months along, when the doctor told her she had "Cupid's tumor", and that she would be having a baby in the next three months.  She was mortified with having to tell my dad, for people at that age just didn't do that!! 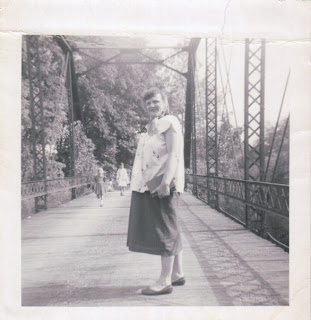 This is my mom just four days before I was born.  It was July 4, 1955, and after enjoying themselves at a church picnic, they were going to transcribe some tombstones in a local cemetery.

For the rest of this post, I'm going to relate a story from my journal...


Mothers Protect Their Young
My mother was a force to be reckoned with!  You just didn't mess with mom - or one of her babies.
One night, she and I were on our way home from church, where I had attended my weekly youth meeting.  I needed some notebook paper, and we didn't have Walmarts or anything like that in those days.  We did have a little corner grocery store, where one could buy penny candy, shoelaces, etc.
She happened to miss the driveway, but it didn't matter, for the next drive also connected to the little store.  There was a bit of a grassy field between the parking lot and the store.  I walked through the little field and headed for the front door.
Before reaching the door, there was a wall of decorative concrete block.  As I rounded that wall, I happened upon 3-4 teenage boys who were circling around on their bikes.  I squared up, went through them, went into the store and bought my paper.
When I came back out, those boys were still there.  They were off their bikes, and now they circled around me, calling me names and poking me in the chest.  I was mortified, for I was sure they were going to do terrible things to me.  I was also sure mom couldn't see me because of the decorative wall.
In the blink of an eye, I heard something akin to a bull crashing through the field and headed toward me.  It was my mom!  Smoke was coming from her nostrils and her ears, and her boobs were swinging back and forth something fierce with her arms pumping away.  (You get the picture!)  When those boys turned around to see what it was, they saw the look on her face and knew they were dead meat if they didn't get out of there quick.  Mom grew up being the oldest of a family that had SIX BOYS, plus a little sister that died at 3 years old.  To mom, taking on these boys were nothing compared to what she had grown up with.
I was never so relieved to see my mom in my whole life.  I don't know what those boys would have done.  But, as long as my mom was nearby, those boys were close to being ground down into a greasy spot! 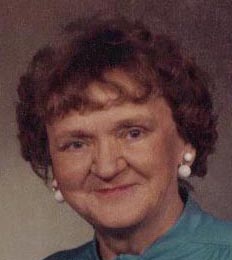