When I was a younger and less experienced genealogist, I had an interesting situation concerning one of my ancestors, the brother of one of my grandmothers who lived in the mid-1800's.  Grandmother's name was Martha Patsy Everman Offill. Her brother's name was John.

Or, was it her sister?

I was puzzled about this every time I saw the entry on the various census records.  In 1850, John E. is listed as a 2 year old female living in the household of Elzaphan and Martha Everman in Carter Co.,KY.  He/she is the seventh daughter in the family.

Good grief!!!  I just didn't know what to think.

Life went on, and I didn't really pursue the situation, because John was not really a direct ancestor.  He/she was the brother/sister of a direct-line grandmother.  I was raising a young family (4 children under 5!), and did the best I could in just getting a pedigree chart maintained and extended.

I listed my Offill family with the old Family Registry (remember those at the Family History Centers?).  It appeared on subsequent microfiche, and I went on to other families.

Then, out of the blue, I received a small package in the mail from a man in California that I'd never heard of.  He had seen my entry on the Family Registry, and enclosed a note saying, "I bet you're wondering about my g-g-grandmother, John Ellen Offill."

John was a woman!  I'd seen her listed as John Allen, John Ellen, John everything.  He even enclosed a picture of her. 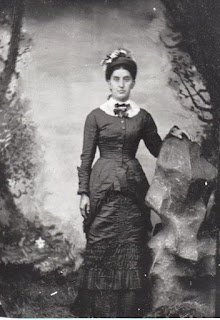 John Ellen Offill Campbell
What a handsome and stylish woman!
There were a couple of other pictures that even showed her cooking at an old cookstove.  John married a man named John Andrew Campbell, and the two Johns appear on the 1925 Linton Co., Iowa State Census as husband and wife.

I'm not quite sure how she acquired the name of John.  My best guess is that this family was "daughtered out", and had always wanted a son.  John was the name of both of her grandfathers.  They feminized it by adding Ellen to it. Some recorded it as "Allen".  Then, she married a man by the name of John.

Sometimes, things are just not as they appear.  I have now learned to include all of the siblings of my grandparents.  This is how "genealogy"  becomes "family history".
Posted by Unknown at 9:38 AM