A Different Plan For RootsTech

UPDATE:  An now, another reprise from an earlier post in 2016.
Another change I will be making...
I am bringing some VHS tapes of interviews
that can be copied to a DVD.

One month from now I will find myself in Salt Lake City, Utah! 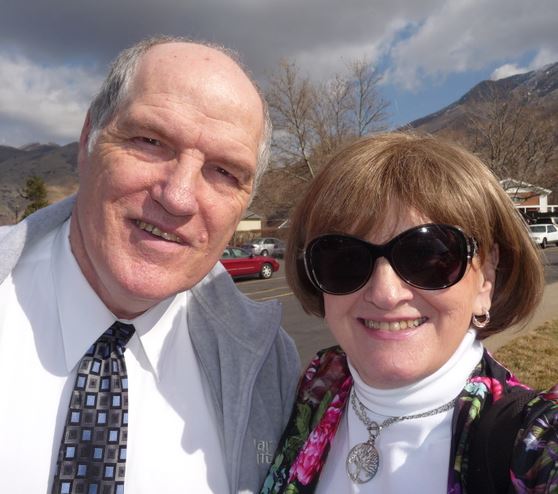 It is certainly not my first time there.  Kerry and his family moved from Los Angeles to central Utah when he was sixteen years old.  Many members of his family still live there.  We have spent years and years visiting family and enjoying reunions.

But, this time it's business.  I have attended four years of RootsTech, the world's largest technology conference.  Though I am certainly not in the ranks of a techno-geek, I am there to speak on other topics.

Last year, it was enormous!  There were approximately 23,000 attendees milling around.  The Salt Palace Convention Center has no problem handling the crowds.

The Exhibit Hall is one place where I love to spend time.  There are the usual vendors you see at most genealogy conferences, plus dozens more.

But, last year I saw something that made me want to set a goal for this year.

There was a young man sitting at a bank of scanners throughout most of the afternoon.  I couldn't help but be drawn to watch him, and finally had the nerve to ask him what he was doing. 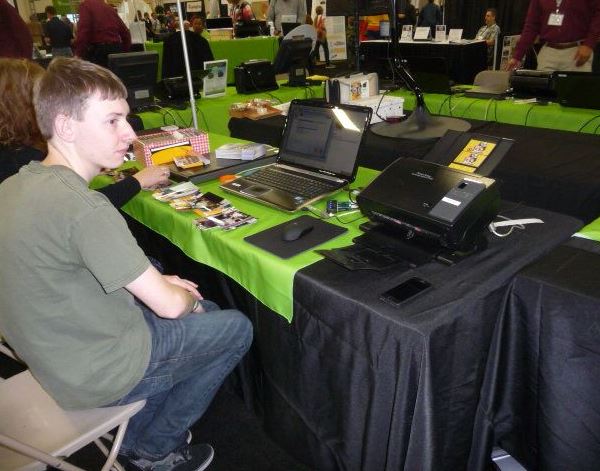 I don't know if he had any interest in family history, but he sure had an interest in technology.  He parked himself at this bank of scanners and stayed until he was completed. 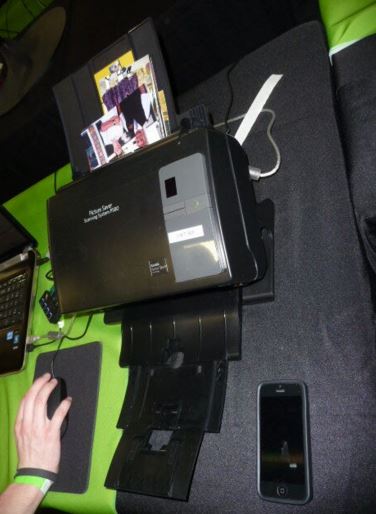 He proceeded to show me how easy it was to feed photos of any size through the scanner, where they would be loaded directly onto his laptop.  I believe he said they could also be loaded onto a flash drive. 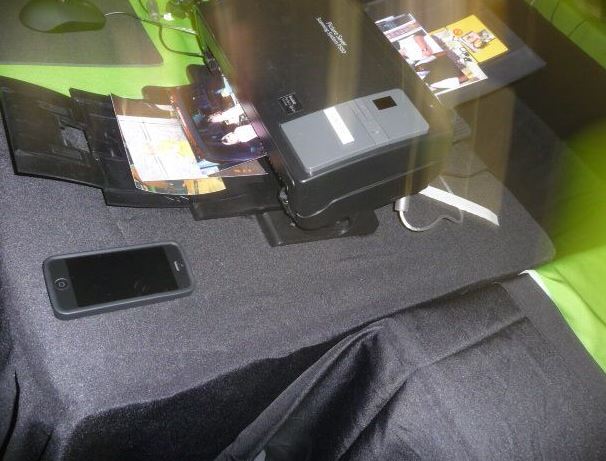 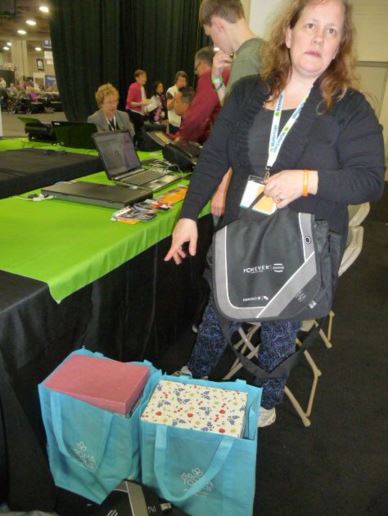 His mother came along with some more bags.  I asked how many photos they thought they would get scanned.  They both estimated 2800 photos!!!  He had been there 2 1/2 hours, and expected to be there not quite one more hour.

And, it was free.

I have photos.  You have photos.
I am overrun with a lifetime of photos.
My father took scads of them.
I have taken scads of them.
We raised a family of four children and took scads more.
Kerry recently had many from his childhood given to him.
It was time to do something with them, other than
filing by piling. 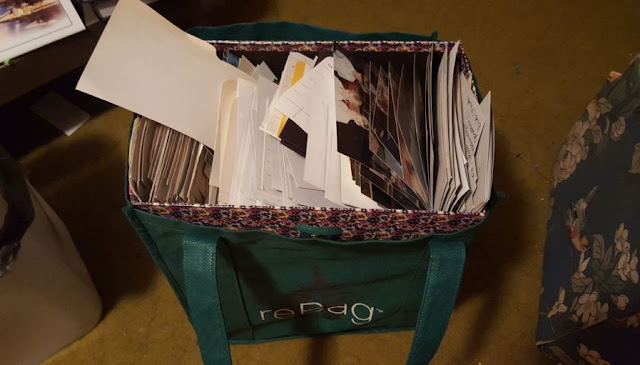 I began with my first box/bag.
I originally began with shoebox-type containers that I bought at Michael's a few years ago.
They were divided into segments that I labeled:
Kerry, Peggy, Kerry & Peggy, Peter, Harmony, Jordan, Erik...
You get the idea. 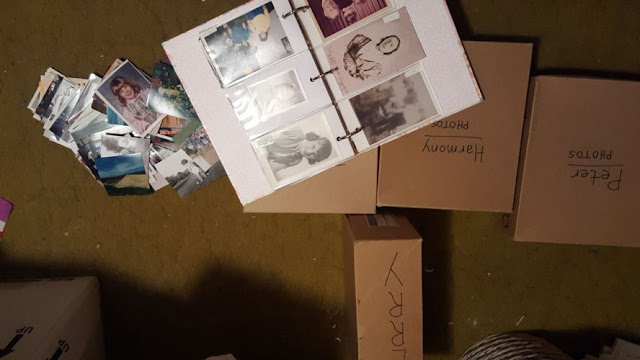 I even had some photos of ancestors and tombstones.
I started out well.
But the rigors of raising of family took over all of my good intentions. 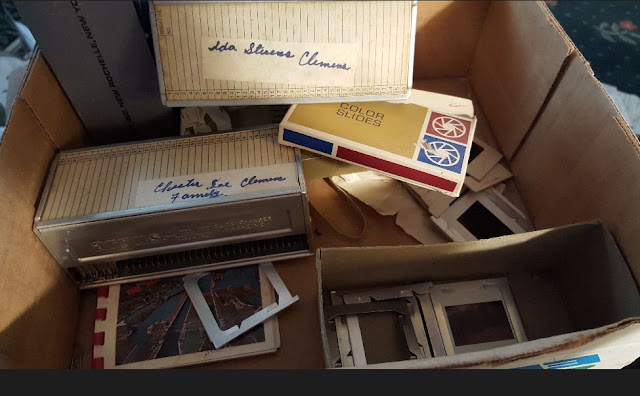 Then, I discovered my dad's slides 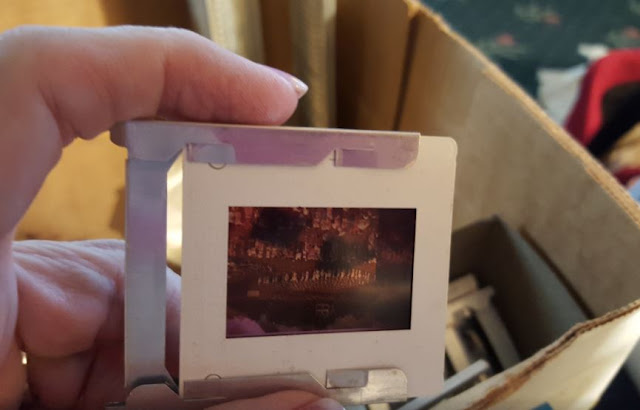 There are hundreds and hundreds of these sides that are in metal brackets.
These were then loaded into "magazines" to be fed into an Argus projector.
As a note, I will not be taking these slides with me.  This project will take a little longer. 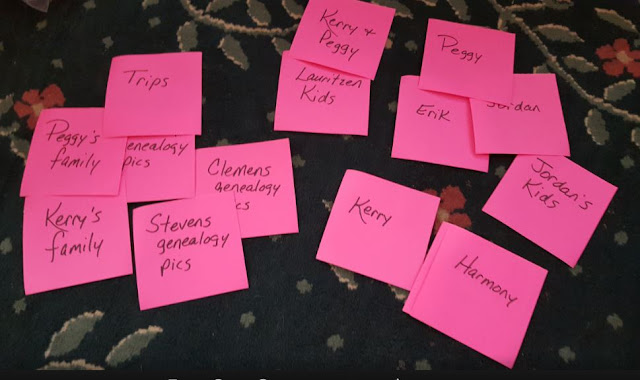 Then came the labeling.
These are NOT sticky notes.
They are simply part of a stack of colored notes that I have a lot of. 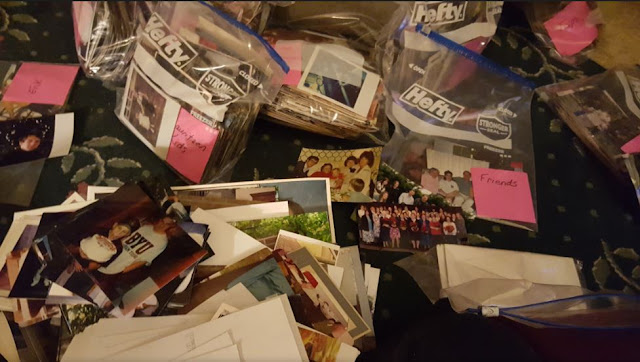 I have spent the past three days dividing these up into zippered bags that I have dropped the labels down into.
This will not be their final storage arrangement.
It's what I am doing in order to put them into a wheeled backpack and take into the Salt Palace.

I will spend whatever time I can scanning and scanning.
Perhaps Mr. Kerry can take his turn doing some scanning, too!

The reason I am doing it this way is because we are driving, and I will have the room to bring such a project with me.  If I were flying, I wouldn't even consider it.

I have sat and scanned hundreds of photos with my Flip-pal, but at the rate I am going, it will be a long time before I wade through the thousands I have sitting in front of me.

For any photos that I have missed, this is what I will use to keep current on my project.

Plus, the last time I was at Sam's Club, I talked to someone in their photo department.  They have a similar sort of scanning technique that I will use at RootsTech.
Their scanner will hold about 200 photos at a time, and will be loaded onto a CD for a cost of about $2.28.  You may want to check your local big-box stores to see if they offer the same services.

So, I may be slow and very behind in conquering this photo dilemma.  But, this is a way for me to get the biggest part of it done, and promise myself to not let it get out of hand again!