A favorite subject of mine is the discovery of journals and diaries left by our ancestors.

March 8 — Did one of your female ancestors leave a diary, journal, or collection of letters? Share an entry or excerpt.

My mother was not an educated woman.  Her handwriting and spelling were sometimes a challenge to figure out.

But, during the later years of her life she began writing down her memories.  I recently transcribed these journals, and have included the following:

"Chester Lee Clemens & Ida Stevens
Wedding Day   Feb 1 1932
We were married on a mondy in morehead Ky in Rowan co it was a cold day muddy& some Ice & Snow.  Richard Hill& his wife Alice took us to morehead in Clem Father old 27 chev car.  Clem put the Battery in the car and got acid in his eyes he look like he was crying all day. We had a late meal in Shouder Ky
When we got home it was dark the neighbors was there to bell us. That beat on dishpans shot off Guns and rode Clem on a pail down to the Store they fell down and Clem just sit on the rail and thay couldint get up.  We all finley arrived at the Store we Bought candy & cigar and treated ever one and thay Bought us a pair of pillows forour bed.  Chester walked to Olive Hill and got me a dress for the wedding & a Scarf he Started about 4 AM in the morning and was back before 8.AM.  My dress at  the neck line.  He wore a Navy Blue Surge Suit.  We stayed all night at my dads House in Lawton Ky a big 7 room house up the Hollow behind Watt Hillman Store.  We had a big dinner at my mom and Dads House the next day and we went down to Chester mom & Dad House the next day we Stayed at my mom and Dads House till we went to House Keeping the 29 of March 1932.  We builted us a nice too room House.  We had 1 bed 1 dresser a big pot belled Stove in one room.  The kitchen.  We had a cook Stove a big round table and a dish Shelf.  And Clem Bought us a big Sow Hog so we had our meat for the next winter. We had a garden & caned & dad give us a young Jersey cow.  Clem didn’t make much at that time he only made .20 pr Hr 12.00 a week to live on he worked 10 Hr a Day" 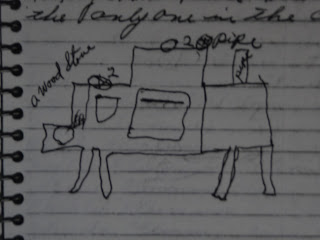 All of her original spelling has been retained.  She even drew a sketch of her first cookstove.