On a cold a snowy Ohio morning, I'm thinking of the women in my family...

March 6 — Describe an heirloom you may have inherited from a female ancestor (wedding ring or other jewelry, china, clothing, etc.) If you don’t have any, then write about a specific object you remember from your mother or grandmother, or aunt (a scarf, a hat, cooking utensil, furniture, etc.)

It is unfortunate that a fire occurred about a year and a half after my mom died.  Many of the items in that house fire would have come to me, for none of my sisters like old things.

But, two things stand out in the possessions I do own: 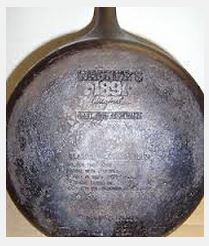 My sister found a cast iron skillet in my dad's possessions when she was cleaning out her garage.  It is similar to the one above.  I cleaned up the rust that was on it, re-seasoned it, and now use it every day.

I can't help but think of the many pans of cornbread, biscuits, fried potatoes, fried chicken, fried pies, fried anything that must have come from that skillet.  It has "Wegner's 1891" imprinted on the bottom.  It's one of the best.

The next items are just as dear:
I inherited three bonnets that my mother and grandmother wore.  Mom's favorite is on the far right.  How well I remember the days she wore it as she tended her magnificent flowerbed, pulled weeds, and worked in the garden under blistering sun.  I believe I still have the pattern she used to make it.

These mementos take me back to a time when I can envision the people who used them, and they allow me to cherish them even more!