The Death of Little Betty

Oh, my.  Life was very hard for our ancestors.

Dad had a little sister that was born just two years after he was born.  She was the 6th child of what would grow into a family of 11 children.


They were poor.  There were lots of mouths to feed.  They ate a lot of beans.  They lived in eastern Kentucky.

One day, when little Betty was about 3 1/2 years old, she was sitting on her older sister's lap while beans were cooking on the pot belly stove.  It was January 1918, and it was probably cold.  She and her older sister were rocking back and forth in a rocking chair close to the stove.  The older sister would "push off" on the stove to keep them rocking. 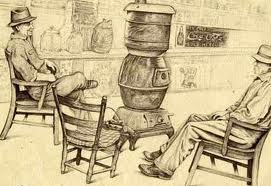 Each time she pushed off, the pot of beans would scoot closer to the edge of the stove until it eventually fell off into little Betty's lap.

Oh, how it must have burned her and hurt her.  Some of it must have fallen onto her big sister, as well.  But, little Betty was burned badly.

In our days of modern medicine, her life may have been preserved and not have been so painful.  But, in January 1918, those measures were not available - and she died.

How her parents must have grieved and felt so helpless!  They had already lost a little boy at 3 months to whooping cough and now, little Betty!  And the guilt the oldest sister must have carried throughout the rest of her life...

Little Betty has always been remembered, for my parents named one of my sisters Betty, in honor of her.