My mother's great-grandfather's name was Levi Wheeler Cline, who lived most of his life in Elliott Co., Kentucky.  Though my mother was only two years old when he died, she can still recount the stories her father told of growing up with Levi and his wife, Alcie [Ailsey, Alice], who had died four years earlier.

There are three men named Levi Wheeler Cline in the area of Elliott Co., Kentucky.  Whether this is our Levi or not is not yet determined.

Several years ago, my sisters and I, along with our Aunt Betty, decided to visit the cemetery where Levi and Alcie are buried, and to see if there were any tombstones we had missed.  We had been to the same cemetery years earlier, but parts of it were overgrown. 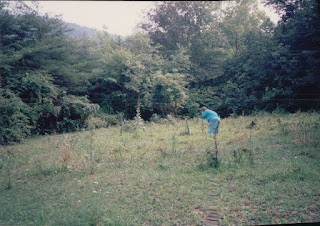 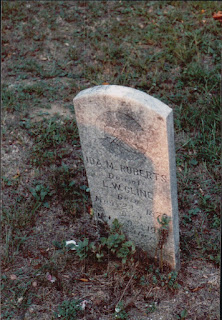 I discovered the tombstone of my mother's grandmother, who died just eight years after her young husband, Richard Stephens, leaving four young boys.  Her parents, Levi and Alcie would end up raising those boys, plus another one she had when she remarried.

This picture of Richard Stephens and Ida Mae Cline was taken through the glass, and still hangs in my aunt and uncle's home. 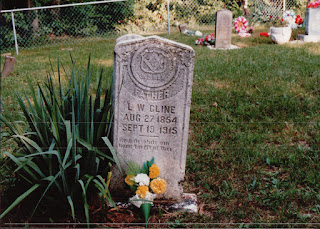 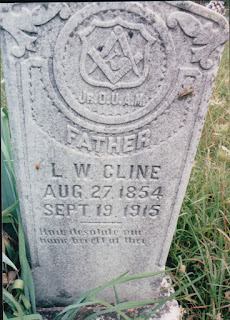 Levi's stone is there, but I couldn't find Alcie's anywhere.  Notice the Masonic symbol on his gravestone.

So, on this trip I took with my sisters and my aunt, I decided it might be good to see if his house was still remaining.  We were certainly close to the property, and my aunt believed if we went in a certain direction we may just happen upon it.

It involved driving across a field

And, across that field came two men in a pick-up truck, complete with deer hooves on the back window and shotguns.

In my best Kentucky twang, I told them were were looking for my Mama's family, and asked what their Mama's name was.

After a bit more talking, they took us over a hill to a run-down house that they declared was indeed Levi Wheeler Cline's house that he had built with his own hands. 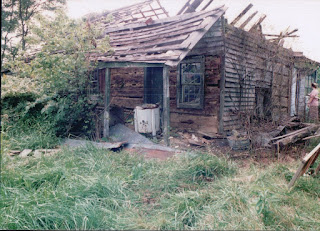 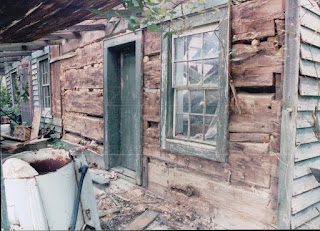 I was standing on property that belonged to my great-grandfather that he had built with his own hands.  Try to look past the condition of it now, and look at what type of home it would have been then. 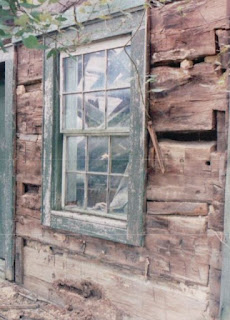 I am just fascinated at the work it took to saw those logs and chink them against winter's chill.

One of the "good ol' boys" asked if I would like to go inside.  Sure!!  Then, he went back to the pick-up truck, reached under the seat, grabbed a pistol, and said, "Come on!"

Okay, now wait a minute.  If you're getting your pistol, I'm getting mine.  He said to me not to worry, that it was just for copperheads.  That's fine.  Here's my camera.

He came back out with a brick that was from his hand-built fireplace!!!

I feel very strongly about being able to stand where our ancestors stood, looking at the same hills and skies that they did.  The trees were probably not the same ones, but everything else was, including the cemetery.

Become proficient in land records, so you can do the same!
Posted by MissPeggy55 at 3:30 PM