Anatomy of a Genealogy Conference

It has been a wonderful experience at the Ohio Genealogical Society Conference this weekend!

Though I was unable to be there when the conference first opened, I arrived just as soon as I could on Friday afternoon.  This year, the conference was held at the opulent Intecontinental Hotel, which is part of the campus of the renown Cleveland Clinic. 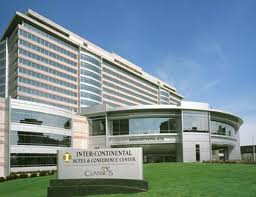 It was a big weekend for Cleveland, for it is also the time for the Rock-n-Roll Hall of Fame inductees to be in town.  Nearly every hotel room was filled.  The good thing is that many of the genealogy attendees and speakers were flying home Saturday evening, and since many of the rock and roll fans were staying over until Sunday, it was easy to get a flight home - including being bumped up to first class! 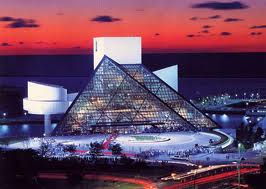 Rock-n-Roll Hall of Fame
I have never been to a conference that was not worth the time and the money to get there.  I was a speaker at this conference, but I am also a learner.  It's important to be both.  So, after I presented my class at 8:00 a.m. Saturday morning, I was set for a day of learning.
Friday night was an absolute joy!  I was asked to be part of the "Panel of Experts",  where the speakers are asked to be part of a panel to field questions asked by attendees.  I was astounded at the vast amount of knowledge that was represented by those on the panel!  I was honored to be asked to be part of the panel, for I would have enjoyed it just as much if I were in the audience asking the questions.  Most of the panel members are quite well-known in the genealogy community, so when I say I was honored to be among them, I mean it with all sincerity.
Networking is such an important part of any conference, and this one was no different.  One of the first persons I saw was good friend Laura Prescott.  We picked up right where we left off when we saw each other in August of last year.  Soon, I was running into more genealogy "peeps" - Bruce and Laurie Buzbee, Gary and Diana Smith, Debbie Deal, Barara Renick, and on and on and on...  These are people I have grown to love and admire through the years, and have taught me many things.  I cherish their friendship.  And, I feel it is important to commend them when they have done a fine job in their respective jobs and assignments.  Someone I know was giving a brand new lecture for the first time, and I made sure they knew just what a great job they did.
No one is more important than the attendees, the lifeblood of conferences.  I cherish their devotion and their input.  Many times, someone will approach me and thank me for classes that I taught over a decade ago, and begin telling me about their grandfather that they told me about way back then.  I smile, because most of the time I can't recall their particular problem, but am grateful for their gratitude.  This morning, they were already in my room when I was setting up my equipment at 7:15 a.m. - and the class didn't even begin until 8:00 a.m.!  I applaud their enthusiasm - it's contagious!
Conference co-chairs Diane Gagel and Jana Broglin did an exceptional job of pulling this conference together.  They always do.  Few of us know the frazzles that may be going on underneath it all, but on the surface it appeared that all went well.  I commend them!
But, in addition to the fellowship of fellow professionals and attendees, I feel my most important duty is to continue learning.
Sometimes, I am amazed at what I didn't know that I didn't know...
﻿
Posted by Unknown at 9:51 PM